Why I no Longer Practice Tithing (Part 1) 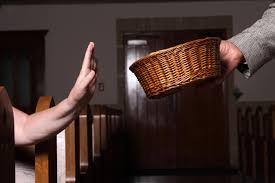 About 4 years ago, my husband and I attended a small ministry that gave certain individuals the opportunity to give a short exhortation or teaching on tithes and offerings right before they were to be given.  You would not know until the morning of service if it was your turn for this.  In order to prepare myself I began to study on my own about tithing for the very first time.  I’d always relied on what I was taught about tithing and offerings, but never delved into the topics myself.  The more I read and studied, the more I began to see a grave disparity between God’s intention for the tithe and the way it is commonly taught in most churches today.  I knew I was touching a sacred cow, and to be honest, it scared me!  I grappled with this for a while, but after much praying I was at peace about it (and still am).

I was recently asked what my opinion on the subject of tithing was after a post I shared on Facebook disagreeing with the structure of the tithe as practiced in most churches.  I wanted to take a few moments to walk through some of the Scriptures and the understanding that I have been given through much prayer on this.  This is actually the first time I have shared this to a larger audience (I have discussed this briefly with individuals from time to time).

The Purpose of the Tithe
If you follow the Lord, you have probably figured out by now that He is VERY purposeful. God does nothing and commands nothing arbitrarily just for the sake of saying or doing something.  I have found that there is always an express and very intentional reason for everything God does.  This includes tithing.  Let’s look at these verses

Numbers 18:20-24
20 And the Lord said to Aaron, “You priests will receive no allotment of land or share of property among the people of Israel. I am your share and your allotment. 21 As for the tribe of Levi, your relatives, I will compensate them for their service in the Tabernacle. Instead of an allotment of land, I will give them the tithes from the entire land of Israel.
22 “From now on, no Israelites except priests or Levites may approach the Tabernacle. If they come too near, they will be judged guilty and will die. 23 Only the Levites may serve at the Tabernacle, and they will be held responsible for any offenses against it. This is a permanent law for you, to be observed from generation to generation. The Levites will receive no allotment of land among the Israelis, 24 because I have given them the Israelites’ tithes, which have been presented as sacred offerings to the Lord. This will be the Levites’ share. That is why I said they would receive no allotment of land among the Israelis.”

A few observations from these passages:

The Giving of the Tithe in the Old Testament

Deuteronomy 14:22-29 NLT
22 “You must set aside a tithe of your crops—one-tenth of all the crops you harvest each year. 23 Bring this tithe to the designated place of worship—the place the Lord your God chooses for his name to be honored—and eat it there in his presence. This applies to your tithes of grain, new wine, olive oil, and the firstborn males of your flocks and herds. Doing this will teach you always to fear the Lord your God.
24 “Now when the Lord your God blesses you with a good harvest, the place of worship he chooses for his name to be honored might be too far for you to bring the tithe. 25 If so, you may sell the tithe portion of your crops and herds, put the money in a pouch, and go to the place the Lord your God has chosen. 26 When you arrive, you may use the money to buy any kind of food you want—cattle, sheep, goats, wine, or other alcoholic drink. Then feast there in the presence of the Lord your God and celebrate with your household. 27 And do not neglect the Levites in your town, for they will receive no allotment of land among you.
28 “At the end of every third year, bring the entire tithe of that year’s harvest and store it in the nearest town. 29 Give it to the Levites, who will receive no allotment of land among you, as well as to the foreigners living among you, the orphans, and the widows in your towns, so they can eat and be satisfied. Then the Lord your God will bless you in all your work.

A few observations from this passage:

What about Abraham giving Melchizedek a Tithe before the law was passed?
In Genesis 14:30 we see that Abraham gave a tenth of his spoils of war to the priest Melchizedek.  Mind you, Israel was not quite a nation yet.  There was no law established to tithe at this time and it was not a command from the Lord.  Joshua did the same thing in Genesis 28.  Again, there was no law to tithe at this time and I believe this is something they did to honor God by providing for the priests that served at the time.  These passages do not give much more detail on this topic and I do not feel they are sufficient to establish any sort of exhaustive teaching on the topic.  There were historically recorded incidences.

What about those verses in Malachi?
Many churches use verses in Malachi to further affirm their belief of the importance of tithing amongst today’s believers and the severity of not tithing.  I am sure you are familiar with these verses:
Malachi 3:8-12 NKJV 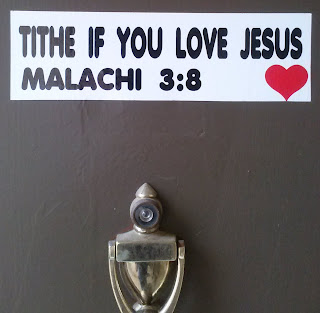 “Will a man rob God?  Yet you have robbed Me!  But you say, ‘In what way have we robbed You? ’In tithes and offerings.  9 You are cursed with a curse, For you have robbed Me, Eventhis whole nation.10 Bring all the tithes into the storehouse, That there may be food in My house, And try Me now in this,” Says the Lord of hosts, “If I will not open for you the windows of heaven And pour out for you such blessing That there will not be room enough to receive it.  11 “And I will rebuke the devourer for your sakes, So that he will not destroy the fruit of your ground, Nor shall the vine fail to bear fruit for you in the field,” Says the Lord of hosts;12 “And all nations will call you blessed, For you will be a delightful land,” Says the Lord of hosts.

The book of Malachi to Israel is rebuke to the Israelites, including the priests.  The people at this time were VERY lackadaisical concerning the things of God.  They pretty did what they wanted and only attended the Temple out of ritual.  It was so bad that the priests were even allowing the indiscretions of the people and dishonored the Lord by offering blemished sacrifices on His altar (all sacrifices to God were to be unblemished).  It was a mess.

The passage above rightfully rebukes the people for not adhering to the law of tithing, and by the law, they were to be cursed for not tithing and blessed when they did.  However, this passage is a reflection of the consequence of breaking the Law of tithing, which we are no longer under.  Also, please remember the purpose of tithing.  It wasn’t just to tithe for the sake of doing it, but it was to provide for the priests in the Lord’s service, widows, foreigners and orphans.  The heart of God is always to provide for His people and those that are in need.  I believe this is a great example of the heart that we should have in return, period. Providing for God’s people and those in need.  We will see illustrations of this in part 2 – New Testament.  Stay Tuned.